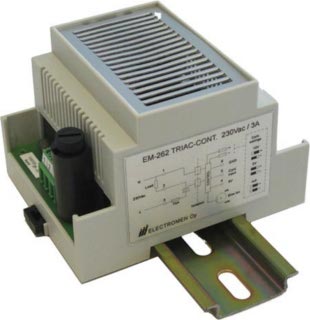 EM-262 is a triac phase angle controller. The unit works fine with both resistive and inductive loads due to advanced triggering technique. Suitable loads include for example lamps, resistors, fan motors and transformers. Base level adjustment can be used to set the start level 0-40%. This function is useful especially in lighting and fan usage. The control stage is galvanically isolated from power stage, which means the unit is easy to connect to a part of an automation system. The power stage is equipped with a fuse.

EM-262 is popular on use of AC fan speed control. Triac based power control circuit gives smooth motor speed control for fan. It's possible to control power from 0% to full 100%. Notice when operating low speed the Triac or commonly also named as Thyristor controller may generate some noise.

Control with 4-20mA and 0-10V signal on Automation systems

EM-262 can be part of automation system on industrial or other environment where the standard 4-20mA or 0-10V signal is used for controlling the electronics. Galvanic isolated control stage makes it safe to use.